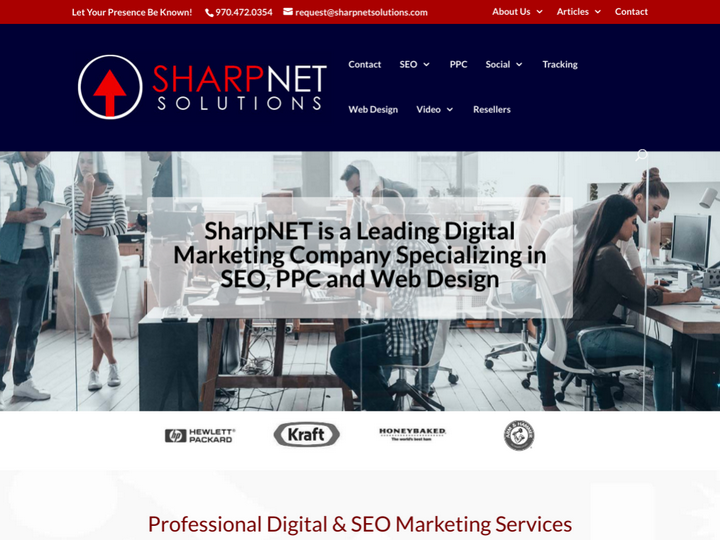 SharpNET Solutions was founded by Chris W. Sharp in September of 1998 as an internet marketing company, located in Fort Collins, Colorado. Older than Google, SharpNET was launched early into the “dot-com boom.” Chris earned his B.S. in Chemical Engineering and was employed as a Process Engineer for companies including Hewlett Packard, Agilent, and Micron Technology where Mr. Sharp earned an engineering patent for the semiconductor industry. Mr. Sharp enjoys giving back; having coached soccer to kids for over nine seasons and track for two. Mr. Sharp and his wife Amie of 24 years have raised three vibrant boys, including identical twins currently attending college at CSU and the oldest who works as a software engineer for Amazon in Seattle.

Working with them a few years , they are very easy to talk to and are awesome to work with . Our business has become more steady and all with them

We hired SharpNET after having several discouraging attempts at SEO and PPC marketing. SharpNET's performance was superior to our other vendors right out of the gate. After only 3 months, we had terminated our relationship with these other vendors and our sales team is currently fueled 100% by SharpNET. We receive prompt and professional treatment, with exceptional results.

We initially hired SharpNET for PPC management and received excellent results. Our cost-per-lead was reduced by 50% compared to what was received when we managed PPC ourselves. After six months or so, we engaged SharpNET with SEO which has gone flawlessly. Our actual cost per lead from SEO is about 1/3rd as PPC. We're still keeping PPC running because it is still profitable, but we were very impressed that the ROI on SEO could be so much better than PPC. -Willem

A friend referred Sharpnet to me who had a successful campaign with her company. I didn't know much about SEO at the time, but the concept made sense. Several years later, SEO has turned into my strongest marketing resource, with only direct referrals performing better. I'm impressed with their knowledge of not only search marketing, but of general business and internet matters. They are generous with their time and are always a pleasure to work with.

Fun company to work with and I'm very pleased with our results. I am expecially impressed with their depth of knowledge and ability to help in areas that go beyond SEO and PPC. Results have been both faster and better than expected. My only reason for offering 4 stars rather than 5 is that they were not able to help with website hosting and could only offer a referral.

They call themselves an SEO firm but SharpNET offers much more. Pretty much anything I need help with related to the internet, then can do or have a solution for it. Extremely knowledgeable and very good customer service. They have been our first "good" experience with SEO. - Alli C

I have been working with SharpNET and Konan for just shy of three years now. They have been our rock-star marketing team where all others have failed. Our business has grown tremendously and search-based lead generation is our biggest source of new business. They are very easy to reach and to speak with and extraordinarily knowledgeable. I'd consider them more like friends now, but they never take that for granted. There is no internet marketing organization in NoCo that can compete with them and I strongly urge other businesses to take a serious look at them. I refer all of my friends to them, and they are all happy as well.

One of the most ethical and honest companies I've ever worked with.

My agency loves SharpNET Solutions. After years of looking for good SEO management firms that ranged from overseas to North America (Many in North America are outsourcing overseas), I am thrilled that I found a real SEO team that is right here in the United States that is very affordable while getting massive results for my clients. Truly honest and respectful and their work out weighs anything that I have worked with since I have bee doing internet marketing in 2006. I highly suggest any business, small and large, to use SharpNET.

Sharpnet is a top-notch team, and we had a much better experience than with other digital marketing companies. Better service, better results and better pricing. Our business can do things now that we were never able to do in the past, which is making a big impact on growth.